by Bob Whitman
It is not very often that we as members of the ARBA see a new breed recognized to our
Standard of Perfection, but in 2006 we are presented with just that, two new breeds. The Mini Satin is a totally American creation, which first began in the late 1970s. From Holland comes our other new breed which was being created as early as 1938, a time when all of the world was about to enter into complete turmoil. This is the story of the Thrianta (pronounced TREE-[O]N-TA) rabbit, the most orange-red rabbit that we have seen yet. Considered red to most, but orange to many, it is regardless, one hot little rabbit, the "Fire of the Fancy."

Part I:  THE EARLY DAYS

[It began with a] rabbit that had been created in Germany starting in 1925. Richard Bennack from Rohrsdorf, discovered a 'Golden' rabbit in a litter bred by a friend. He acquired this common fawn colored male which he would later mate to a black/orange Japanese (Harlequin), giving him the dominate yellow he was working for. He test mated the offspring with what is believed to be the European Silver Fawn (a stocky built breed from our sleek Silvers in the US). This breeding hardly proved ideal as he was now faced with the problems of silvering. Bennack continued to further cross with Havana, Chinchilla, Black Tan and Red New Zealand breeds. The 'Gold of Saxony' aka Saxon Gold aka Sachsengold was on her way to being created. MEANWHILE: In the Netherlands, a new breed was being developed in the Dutch province of Drenthe by a school teacher, Mr. H. Andreae from Assen. Mr. Andreae had his orangey-colored rabbits in his shed since 1938, having used Black Tan, Havana and a self colored Tortoise Papillion (English Spot) to create the Thrianta breed; named for the region of their birth. Mr. Andreae seemed to have a very special relationship with the House of Orange, ruled by Wilhelmina, Queen of the Netherlands, for he not only created a deep orange rabbit, but also kept flowers in his front garden in the orange tones, in support of the royal house that oversaw his country. Andreae contributed in the drafting of a breed standard, recommending various changes to the original planned text. The breed was admitted to the Dutch standards on May 1, 1940, but with a rather remarkable description of the color to show the descendent of the Tan, in that the orange top color was required to show a hint of brown coloration in it. 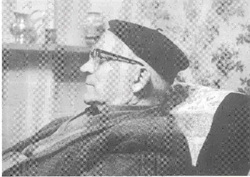 Much would change mere days after the Thrianta was recognized, for on the 10th of May 1940 Adolf Hitler's Nazis, the Wehrmacht, invaded the Netherlands. Just five days later Queen Wilhelmina had little choice but to surrender her country to the German occupation. The Nazi regime looked upon H. Andreae's gardens as a sign of nationalist support for the House of Orange and ordered him to tear all the flowers out. Andreae did as demanded, but continued to show his defiance by concentrating his efforts on the orange rabbits, which had to be hidden away from the Wehrmacht. Mr. Andreae certainly showed remarkable courage during this horrific time, not only for his family, but orange rabbits as well.
​
While we are (or should be) familiar with the history of World War II, Europe was extensively bombed, but by no means was Germany spared the same ravages of the war, as they suffered far more damage during the bombing. Many rabbit breeders lost their homes, rabbits and their lives as well. I'm not certain whether Richard Bennack had died or been killed during this time, as this part of history is unclear, but what is known is that most of the Gold of Saxony were lost by wars end. Bennack's son gather up what few 'Golden Rabbits' remained in 1945 and continued to develop his father's breed for another 8 years. In 1951 the breed was presented at his local Coswig Club's meeting near Dresden, calling them the Golden Rabbit of Saxony. In 1952 the breed would be shown for the first time at the East German Championship show in Leipzig and judged by Frederick Joppich and Tunger. Bennack asked for Joppich's advice on breeding strategy, only to learn that he said avoid any out crossing to the New Zealand Red in order to keep them small and compact. He also recommended that a specialty club be formed (numbers speak). Bennack submitted a list of 50 interested breeders, but even before official recognition, the quarrels began. In 1959, Georg Kaessler voiced his opinions that the breeding of the Gold of Saxony was in the hands of a mere novice. He too demanded that the weights be around 4 kg (9 lbs) to ensure the economic usefulness of the breed. He further gave insult by voicing his opinion that the name 'Gold of Saxony' was more suitable to a brand of cigarette than rabbit, suggesting they be called 'Roehrsdorder' in honor of the city of origin. Kaessler further pointed out, that the color was still very inconsistent, ranging from ruby red to orange, yellow and even reddish/brown.
Part III: COFFINS, PIGEONS & RABBITS

The war took a great toll on the Thrianta breed in Holland as it did the 'Golden Rabbit' of Germany. Little promotion could be done, many animals had to be eaten to avoid starvation or were seized by the Germans for the same reason. By the end of the war, Andreae's breed was all but extinct. The Nederlandse Konjinenfokkers Bond (NKB) listed the Thrianta as the 'Orange Tan'  in their 1957 standards, but by 1966, they were no longer recognized. H. Andreae would die in 1959. A German breeder, Dr. Kissner, is believe to have imported most of the remaining Thriantas to improve the color in his Gold of Saxony. Mr. Gelein, the secretary of the Dutch breed standards commission had heard about the very nice examples of the breed in East Germany, so in 1968 decided to imported Germany's Sachsengold into Holland with Dr. Kissner's assistance, but not without great difficulty, as there was no free movement between the divided Germany. A unique smuggling plan was devised to secure a trio of rabbits. There was a Piet van Dijk from Vinkeveen, who was breeding white-headed pigeons, and the East Germans were keen to have the breed in their country. During the same time the East German government was wanting to transfer for re-burial, some of their soldiers that had been killed during the war and remained buried on Dutch soil. East Germany and the Dutch officials reached an agreement to allow the transport of the bodies, yet these transports were seemingly not well controlled along the route. Within the coffins pigeon fanciers smuggled the white-headed pigeons, along with fertilized eggs. On the way back to Holland for more bodies, the coffins were empty. After several trips, a trio of Gold of Saxony finally appeared upon Dutch soil, the project was indeed risky, but successful. The trio of rabbits bred well and many high quality animals would be produced. Dutch breeders began to cross the Gold of Saxony with their Thriantas, yet mostly with rather negative results as there was differences in color, coat of fur and weights. It is now really questionable if bringing in the Gold of Saxony did much to improve Andreae's Thriantas at all.
In 1976 a Dutch specialty club was formed for Andreae's creation, but even before the founding of the club, many staunch fanciers voiced their opinions loud and clear that the breed should once again be known as Thrianta. Thus was born the Thrianta SpeciaalClub ( http://www.thriantaclub.nl/ ) in the Netherlands. It should be noted that most of Europe recognizes the Sachsengold and not the somewhat smaller and bold Thrianta. England imported Thriantas in early 1980 from Holland and they are now recognized by the British Rabbit Council, yet overseen by the Rare Varieties Club in the UK.

In 1987, in an effort to develop the Red Netherland Dwarf, the late Bob Pettit of Illinois told Judith Oldenburg-Graf of Iowa, that there was a small orange-red rabbit he had heard about somewhere in Europe. Judith began a letter writing campaign to locate animals. By 1992 she finally made the connection, imported four animals, but learned that what she had received were crossed up Sachsengold. More connections were made and in 1996 she traveled to Holland and bought 5 does and 3 bucks from Thrianta breeder B. de Bruin. In 1998, Lew Bevan from England brought to America a pair of Thriantas which Glen Carr of Illinois managed to acquire. Glen procured another pair from Nigel Owen also of England in 2000. Carr would later comment the buck, which he named Nigel, was the best buck he ever had. Judith had been invited back to Holland for the 25th anniversary of the Thrianta SpeciaalClub in 2001 and was able to acquire 18 animals for her journey home. This author brought to Texas a pair upon returning from the UK's Bradford Championship Show in January, 2002, while Glen Carr was awaiting a shipment of 5 does and 3 bucks from Mr. De Bruin of Holland, but would exclaim that none of the bucks were ever used in his breeding program. Tommy and Diane Thompson of Kansas imported from Holland, I believe a pair to help in their development of the Red Dwarf project. The last importation that this author is aware of is Judith receiving 4 animals from Will Plasmeijer of Holland in 2003. This would be the foundation stock for all the known Thriantas in America.

Judith Oldenburg-Graf became the first holder of an ARBA Certificate of Development and Glen Carr the second certificate holder. Judith presented the Thriantas in 2001 at San Diego, CA and 2002 at Peoria, IL but sadly the breed was rejected at both presentations. Glen Carr presented in Wichita, KS on November 5, 2003 to a unanimous approval by the Standards Committee. It was also at this time that the idea of the American Thrianta Rabbit Breeders Association (ATRBA) was born, founded by Glen Carr, Carrol Hooks and Bob Whitman. Yours truly coined the slogan 'Fire of the Fancy' and the ATRBA officially kicked off on January 1, 2004. Glen presented at Providence, RI in 2004 to a unanimous vote once again. On October  26, 2005 at Indianapolis, IN large crowds gather around the presentation arena as the Thrianta was the first breed up. Glen is called in at 9:00 am by the committee, then at 9:15 Glen gives the crowd a 'Thumbs Up'  the breed was unanimously approved, becoming the first new rabbit breed recognized by the ARBA since 1988, and receives full recognition by the ARBA on February 1, 2006. After such a troubled beginning, we are proud to have the Thrianta breed in America to stay.